The best lodging, only 8 minutes to downtown Lititz, PA.

The Speedwell Forge Bed and Breakfast in Lititz, PA is steeped in the rich history of Lancaster County. Built in 1760, the main house was listed on the National Register of Historic Places in 2006.

Speedwell Forge has not always been a Lancaster County bed and breakfast. Its story begins in 1734, when Peter Grubb, a mason, literally stumbled upon one of the largest and richest iron deposits ever found in the US.

He named the area Cornwall, and he built a bloomery to smelt the ore and produce cast (or “pig”) iron. In 1742, this was replaced by the Cornwall Furnace, which is now a National Historic Landmark and offers regular tours.

Book Your Stay Compare All Rooms 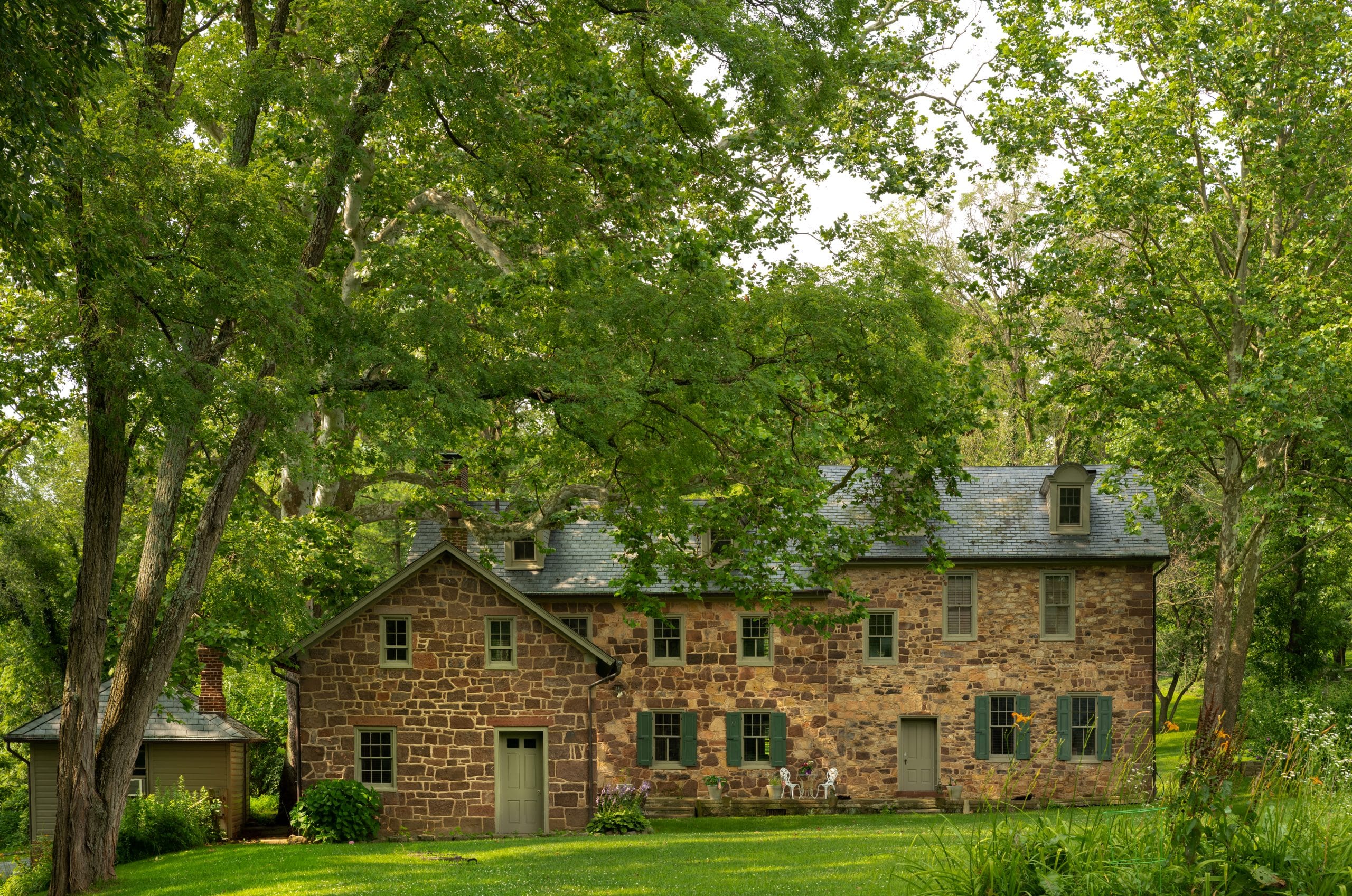 Our Reviews on Bed & Breakfast Inn Bookings Sites are Outstanding

TripAdvisor is pleased to recognize Speedwell Forge B&B for Service Excellence. This honor is based on reviews and opinions of millions of travelers who consistently gave your hotel top ratings in service.
Read more at TripAdvisor.com

Speedwell Forge has not always been a Lancaster County bed and breakfast. Its story begins in 1734, when Peter Grubb, a mason, literally stumbled upon one of the largest and richest iron deposits ever found in the US. He named the area Cornwall, and he built a bloomery to smelt the ore and produce cast (or “pig”) iron.

In 1742, this was replaced by the Cornwall Furnace, which is now a National Historic Landmark and offers regular tours (The Cornwall iron was mined for almost 240 years, until the open pit mine flooded during Hurricane Agnes in 1972).

In 1750, at the age of 20, James Old emigrated from Wales and arrived in Lancaster, then the tenth largest city in the colonies, where he started working at Windsor Forge. He decided to strike out on his own, and in 1760, he purchased 400 acres along Hammer Creek and built Speedwell Forge, along with a small stone house for his family.

The forge took the brittle cast iron from the furnace, heated it, and used a 450-pound, water-powered “trip hammer” to beat out the impurities, making it stronger and more malleable. The resulting bar (or “black”) iron was then sent over land to Newport, Delaware, and shipped to blacksmiths throughout the colonies and England. (Newport Road still follows that ancient trail.)

The forge required charcoal to heat the iron, and “colliers” would cut down an acre of trees per day to keep the forge in blast. Farmers cultivated the newly-cleared fields, and found the soil to be some of the best non-irrigated farmland in the world. Word spread to Germany and Switzerland, where a group of farmers were being persecuted for their religious beliefs, and the Amish and Mennonites began migrating to Lancaster.

Today, Lancaster has the largest concentration of Amish in the US. Around the same time, a small group of Moravians (another Christian denomination from Germany) established Lititz, a closed religious community. It would be another 100 years before non-Moravians could own property in the town.

Robert Coleman was only 16 when he arrived from Ireland. Penniless but educated, he was a clerk in Reading for two years before Peter Grubb hired him as a clerk at Hopewell Forge. Six months later, James Old hired him away, and Coleman lived with the Old family in the Speedwell Forge mansion. There he met Old’s daughter, Anne, and they married in 1773.

With the help of his father-in-law, Coleman began building his own iron empire, eventually owning 5/6s of the Cornwall iron mine, most of the forges and furnaces in Lancaster County, and 22,000 acres of land.

Coleman became Pennsylvania’s first millionaire and famously forbid his daughter, Ann Caroline, from marrying a young lawyer names James Buchanan. (Ann died shortly thereafter, and it is widely believed she committed suicide; Buchanan never married and was the only US President who was a bachelor. Ann’s portrait still hangs at Wheatland, Buchanan’s estate in Lancaster.)

In 1784, Coleman purchased Speedwell Forge from his father-in-law. Although he no longer lived there, Coleman expanded the stone house around 1795, adding the east wing in the formal Georgian (or Federal) style popular at the time: two rooms deep, symmetrical, off a central hallway. The ceilings were higher and the moldings were much more intricate than the Colonial half. The stone privy appears to have been added around this time.

In the 1880s, steam radiators were added, the hardwood floors and windows were replaced, and corner cupboards were built in almost every room to match the original in the parlor. Electricity and indoor plumbing were added in 1941.

In the 1850s, anthracite coal was discovered in Eastern Pennsylvania, and ironmaking moved to Pittsburgh and then to Detroit. Speedwell Forge stopped production in 1854, and today there is nothing left.

The Speedwell property remained in the Coleman family, however, and they began breeding standardbred horses for sulky (or harness) racing. Their most famous stallion was Middletown, son of Hambletonian Ten. The circular driveway used to be a quarter-mile training track.

The Colemans sold the horses in 1898, and the property became a corn and dairy farm. In 1941, Margaret Coleman Buckingham sold the Speedwell property to Gerald and Kathryn Darlington. In the 1960s, the state of Pennsylvania purchased about 500 acres along Hammer Creek and dammed it, creating Speedwell Forge Lake. In the 1990s, Lancaster County purchased 300 acres and created the Speedwell Forge County Park. Both areas are ideal for hiking, kayaking, fishing, bird watching, and picnicking.

Kathryn Darlington passed away in 1986. Her only son, Bill Darlington, had moved to the other end of the farm and, in 1980, established the Wolf Sanctuary of Pennsylvania.

Needing to be near the wolves, the mansion was left vacant for over 20 years. Bill’s youngest daughter, Dawn, was born on the farm and always wanted to live in the mansion. When Bill passed away in 1998, Dawn became determined to realize her dream. In March 2005, after seven years of saving, two years of planning, and one year of cleaning, she moved home and began the restoration, which was documented, with photos, here. In 2006, the property was listed on the National Register of Historic Places.

The mansion was not changed except for the addition of bathrooms and the kitchen island. The windows and floor date to the 1880’s and were fully restored. The slate roof was replaced using 80-year-old Peachbottom slate salvaged by Amish roofers from a barn that was being demolished, and copper gutters were installed.

The electric and plumbing were completely replaced, and air conditioning, telephones, and Internet were added. Almost all of the furniture belonged to Dawn’s grandparents and was fully restored.

Outside, all of the stone was “repointed” (replacing the mortar) and inside all of the walls and ceiling received a new coat of plaster. It took four painters over three months to hand-paint the mansion and cottages. The privy and spring house were also restored.

Read About The Speedwell Forge Restoration
We use cookies on our website to give you the most relevant experience by remembering your preferences and repeat visits. By clicking “Accept All”, you consent to the use of ALL the cookies. However, you may visit "Cookie Settings" to provide a controlled consent.
Cookie SettingsAccept All
Manage consent

This website uses cookies to improve your experience while you navigate through the website. Out of these, the cookies that are categorized as necessary are stored on your browser as they are essential for the working of basic functionalities of the website. We also use third-party cookies that help us analyze and understand how you use this website. These cookies will be stored in your browser only with your consent. You also have the option to opt-out of these cookies. But opting out of some of these cookies may affect your browsing experience.
Necessary Always Enabled
Necessary cookies are absolutely essential for the website to function properly. These cookies ensure basic functionalities and security features of the website, anonymously.
Functional
Functional cookies help to perform certain functionalities like sharing the content of the website on social media platforms, collect feedbacks, and other third-party features.
Performance
Performance cookies are used to understand and analyze the key performance indexes of the website which helps in delivering a better user experience for the visitors.
Analytics
Analytical cookies are used to understand how visitors interact with the website. These cookies help provide information on metrics the number of visitors, bounce rate, traffic source, etc.
Advertisement
Advertisement cookies are used to provide visitors with relevant ads and marketing campaigns. These cookies track visitors across websites and collect information to provide customized ads.
Others
Other uncategorized cookies are those that are being analyzed and have not been classified into a category as yet.
SAVE & ACCEPT